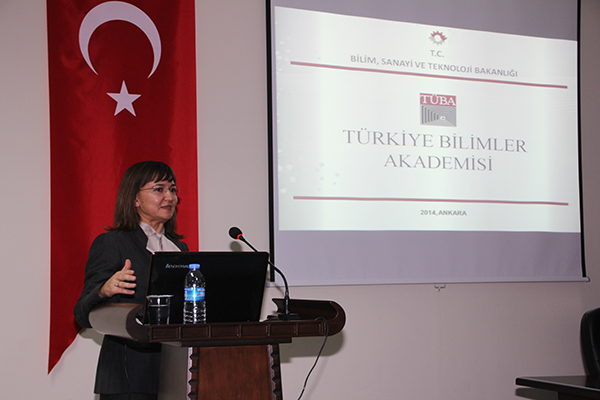 Prof. K. Arzum Erdem Gürsan, TÜBA Principal Member and Ege University Faculty of Pharmacy Member, was elected to the Advisory Board of the Scientific and Technological Research Council of Turkey (TÜBİTAK).

Who is Prof. Kadriye Arzum Erdem Gürsan?
In 1993, she graduated from Ege University, Faculty of Pharmacy. Shr completed his master's degree in 1996 and her doctorate degree in 2000 in the same faculty in Analytical Chemistry Department. 2000-2003, she worked as an assistant professor and 2003-2009 s,he worked as an associate professor in Ege University Faculty of Pharmacy Department of Basic Pharmacy Sciences - Analytical Chemistry.

She received TÜBITAK Incentive Award in 2006 and TÜBİTAK Science Award in the field of health sciences in 2015. In addition, she was elected as the member of Women in Science and Engineering-WISE at Association of Academies and Societies of Sciences in Asia-AASSA.

Prof. Gürsan has been working on the development of electrochemical biosensors based on drugs, enzymes and nucleic acids, as well as many national and international collaborations on environmental, food and health applications. Prof. Gürsan’s scientific researches are based on single and multiple measurement based development of new generation biosensor/aptasensor technologies working with the principle of “drug-DNA interactions, aptamer-protein interactions, nucleic acid hybridization based on sequence selection and infectious diseases and” “disposable principle” for determination of biomarkers practices. Prof. Arzum Erdem Gürsan aims to develop magnetic particles, carbon nanotubes, graphene and graphene nanomaterials, nanoblocks, nanoclabs, nanoparticles, dendrimers, conductive polymers, and electrochemical biosensors based on biopolymers.

She was awarded with TÜBA-GEBİP Award in 2001 and elected as TÜBA Associate Member in 2007. She became full member in 2016. Prof. Arzum Erdem Gürsan has been working as a professor in the Department of Basic Pharmacy – Analytical Chemistry at Ege University since 2009.