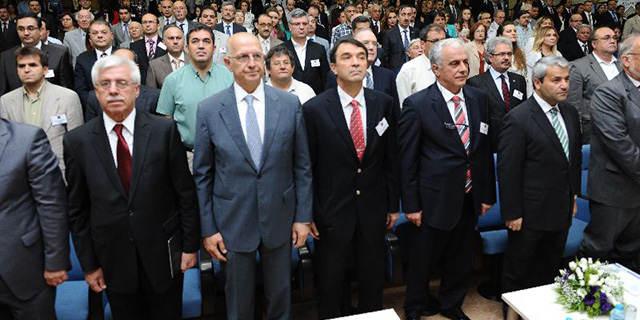 In his opening speech Mr. Ergün said that it was a great pleasure to give awards to scientists and that scientists should be given the best conditions conducive to research. He added that Turkey recorded great advances in economy, social policy, democratization and foreign policy in recent years and that Turkey was targeting to become one of the ten greatest economies in the world. This target required that great importance be given to science. He continued as follows:

“A country which aims to become one of the ten greatest economies in the world, must also aim to have the best universities, research centers, academicians and scientists in the world. We know that every step in science will carry us a few steps further in other areas. We are obliged to leap forth rather than advance step by step. Science is the field which will enable us to do this.”

Academy President Prof. Dr. Ahmet Cevat Acar noted in his speech that this year, 28 scientists selected from 124 applicants were rewarded by TÜBA-GEBIP. Thus until now, 294 young scientists were supported by the GEBIP program. He also noted that within the context of TÜBA TECEP the aim is to promote the production of high quality course materials and that in 2012, 30 works were deemed worthy of the TECEP award. He emphasized the importance of coordinated action between universities, the Higher Education Council of Turkey (YÖK) and TÜBA for the advancement of scientific research. He also noted the importance of increasing the salaries of scientists and that it is highly important to increase the attraction of science for the long-term innovation performance of our country.

Prof. Acar pointed out that the development of a country would be in jeopardy without basic and social sciences and expressed his concern for the diminishing interest in these disciplines. Nevertheless, he underlined his belief in the potential of Turkey and in the embedded cultural tolerance which will carry this country to a stronger and more prosperous future thanks to the new generations who are much better educated. He added that our differences should be considered as our strength.

After the speeches, awardees received their awards.

Finally, the Vice President of ALLEA (All European Academies) Prof. Dr. Ed Noort gave a lecture on “The Role of ALLEA and the Position of Academies in Europe: Excellency and Independence”. In the afternoon, TÜBA’s 43rd General Assembly Meeting took place.