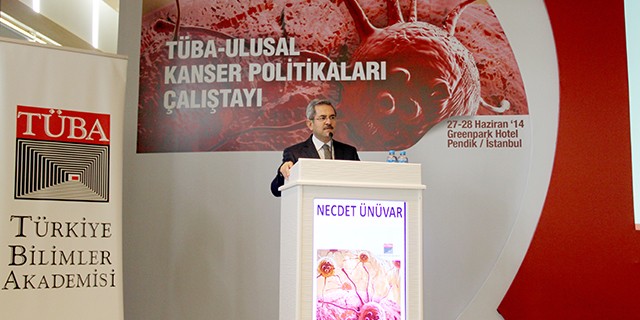 The ‘TÜBA-National Cancer Policies Workshop’ was held on June 27-28, 2014 in Istanbul with the participation of 218 scientists. TBMM Health Commission Chairman Prof Dr. Necdet Ünüvar, Ministry of Health Advisor Prof. Dr. Eyüp Gümüş and TÜBA Chairman Prof. Dr. Ahmet Cevat Acar presented speeches in the opening of the workshop. The moderator and panelists participating in the workshop were comprised of individuals from various universities throughout our country, authorities from the Ministry of Health involved in this subject and employees of The War Against Cancer Department Directorate, The Turkish Medical Oncology Organization (TTOD), The Turkish Radiation Oncology Organization (TROD), The Turkish Pediatric Oncology Group (TPOG), YÖK and TÜBİTAK-TÜSSİDE (Turkish Industry management and administration institute).

TBMM Health, Family, Employment and Social Affairs Commission Chairman Prof. Dr. Necdet Ünüvar, who made the opening speech, pointed out that 100 Mobile Cancer Diagnosis, Scanning and Education Centers were planned to be opened and added: ‘Cancer is a disease that occurs for genetic or environmental reasons with 162,000 new cases we encounter every year and nearly 140,000 people have lost their life as a result. Out of the 14 million new cases that are announced in the world every year, 8 million will result in mortality. This is a serious problem which neither the Ministry of Health nor anyone involved in the health industry can ignore.

Emphasizing that the most important point in the ‘Health Transformation Program’ is the ‘Cancer Early Diagnosis, Scanning and Education Centers’ (KETEM) Prof. Dr. Ünüvar stated that there are 134 KETEMs and soon 100 Mobile KETEMs would be actively scanning at these centers. Ünüvar added; “We know that one out of 3 cancers can be diagnosed early and one out of 3 cancers can be prevented. As the number of Mobile and fixed KETEMs increase the number of early detections will increase reducing the mortality rate. This will make the work of our scientists much easier.’

A Turkish Health Institutes Directorate is Being Established
Explaining that Institutes serve as greenhouses for scientists, Prof. Dr. Ünüvar pointed out that when the setting is right outstanding results can be achieved and this was the objective in establishing ‘TÜSEB’. ‘Cancer, Chronic Diseases, Biotechnology, Quality and Accreditation, Traditional and Supplementary Medicine and Mother and Child Health Institutes are being established. As the need grows the number of such institutes may increase. The Cancer Institute will be established within 6 months while the others will be completed in 3 years’ he said.
After Prof. Dr. Ünüvar’s speech the moderators and participants who had been given ‘Current Status Analysis Study’ and ‘Recommendation Development Study’ training the day before by the Turkish Industry Management and Administration Institute (TÜSSİDE) in order to generate a healthier report, took their places in the workshop rooms.

In the statement made by TÜBA-Cancer Study Group Coordinator Prof. Dr. Taner Demirer he said, ‘Because the problems involved particularly in support treatments were discussed at the TÜBA- National Cancer Policies Workshop, the points of caution in medication production and preparation, the problems experienced in making sure medications reach patients, and problems experienced with medications in the field and in application were brought to the table and serious assessments were made. Prof. Dr. Demirer, who pointed out that the Workshop was made possible with the participation of important stakeholders in the diagnosis and treatment of cancer such as the Ministry of Health, the Turkish Radiation Oncology Organization, the Turkish Pediatric Oncology Organization, the Turkish Hematology Organization, the Turkish Medical Oncology Organization, YÖK, TÜBİTAK and universities, said: ‘Cancer diagnosis and treatment is a multi-disciplinary approach. In other words it is a subject in which many different areas of specialty get involved but there are still a lot of deficiencies in our country. It has been expressed that it is crucial to have palliative care centers in all of our regions and the serious concerns of cancer patients and families were discussed.’

The number of studies being done in basic and clinical oncology in our country falls short of the studies being done in North America and Europe. The need to clear the way for research, remove bureaucratic obstacles and increase the contributions of our country to world literature on this subject was emphasized at the workshop. It has been observed that the medical oncologists and hematology specialists in our country are still insufficient. It was also pointed out that the Ministry of Health needs to clear the way for the special field of ‘Medical Ethics Specialty’. The conclusive report that was prepared at this Workshop will be shared with the public. This report is very important. Prof. Dr. Necdet Ünüvar’s opening speech was very encouraging in terms of the results from this report being put into practice within the year ahead of us.