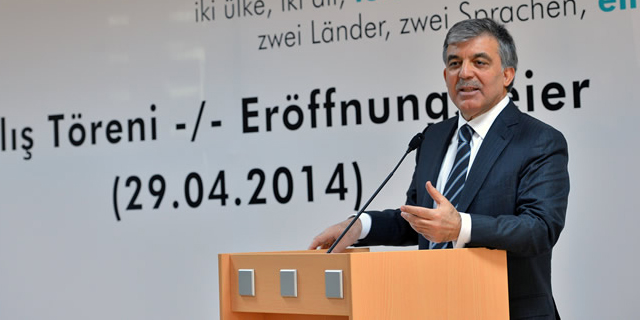 The official opening of the Turkish-German University was made by the President Abdullah Gül, President of Germany Joachim Gauck.

President Gül, in his inaugural speech said "In fact, I didn't receive personally in the German system of education, I'm not from a German School, but in Turkey I early ever felt the deficiency of a Turkish-German university. I don't want that place be any university. I want that everyone competing to enter the highest scoring students wants to enter from Germany, where students want to be a university."

President Gül noted that so desire, Turkish-German University is a university of technology-based and said “Of course, there is also a requirement for college existing of all other branches and social science branches. For this reason here, law, including archaeology in future many branches will be established. But i believe that this university becoming technology weighted will provide very large contribution.”

Germany President Gauck, “Daring to something new needs effort every time and It is exciting and inspiring in a positive sense. Turk - German University project is something like that and the official opening ceremony was held today.

Science, Industry and Technology Minister Fikri Işık in his explanation; stating that he finds important the opening of the Turkish-German University, in the sense of to move two countries relationship to another dimension and said they care about Turkey and Germany to be in very close relationship especially in education area.

Işık said, on the other hand Germany is a big country in science and technology area and one of the countries that invest most in this area, and benefiting from savings of Germany in this point also to transmit this savings to Turkey is important.

After speeches, to commemorate the official opening of the Turkish-German University, plaque of the cover where inscribed the name of the both president were removed by President Gül and President Gauck.

After Ceremony, President Gül and his wife with President Gauck and wife examined the model of university, and got information from Prof. Dr. Halil Akkanat.