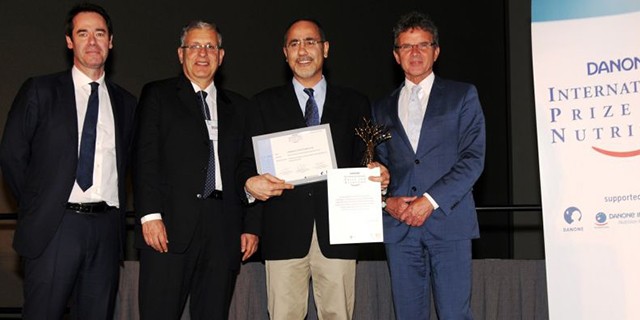 TÜBA Founding Member Assoc. Dr. Gökhan Hotamışlıgil who continues his work at Harvard University, has been awarded “9th Danone International Nutrition award” referred to as the Nobel of nutritional science.

Harvard University School of Public Health, Department of Genetics and Complex Diseases Head Hotamışlıgil, has received his award given him by Danone Institute International, at the ceremony on April 29 at the San Diego Convention Center USA.

With this important award which will allow expansion of research, Assoc. Dr. Hotamışlıgil saying that he hoped to be able to contribute common chronic metabolic disease prevention efforts, also added he is excited about the award and with award could shed more light on nutrients’ effects on metabolic diseases and immune system.

Hotamışlıgil had an important step on the subject with studies which examines the link between the immune system and metabolism. Assoc. Dr. Hotamışlıgil with the inventions in this area called 'İmmunometabolism', enlightens causes leading to the diseases obesity, diabetes and atherosclerosis. Assoc. Dr. Hotamışlıgil with his groundbreaking inventions, in the field of nutrition and metabolism-related non-infectious chronic diseases, reveals the molecular structures of nutrients effects on disease mechanisms.

Danone Institute International as an institution established in order to support the advancement of scientists and nonprofit, reward scientific studies on the relationship between nutrition and health with French 'Fondation Recherche Médicale' support biennially.

Danone International Nutrition Award given for the purpose appreciation of excellence and progress in Nutrition. is given to researchers in the field of new concepts and research which has application potential in the fields of human nutrition and health.

Candidates were determined following an independent and international selection process and the owner of the award are rewarded with 120,000 euros due to publications were brought to science world.