TÜBA Awards (TÜBA International Academy Prizes; TÜBA-GEBİP - Outstanding Young Scientist Award; TÜBA-TESEP - Best Scientific Authored Book Award) which are under the auspices of the Presidency found their owners. In addition, the 2019 TÜBA Fuat Sezgin Special Awards were given by the Academy to commemorate TÜBA Honorary Member the late Fuat Sezgin, in the year 2019 within the scope of the Fuat Sezgin Year declared by the Presidency. All of the awards will be given by President Recep Tayyip Erdoğan at the ceremony to be held at the Presidential Complex on 30 December, 2019.

TÜBA International Academy Prizes are given in three categories: Social and Humanities, Health and Life Sciences, and Science and Engineering Sciences. As a result of the evaluations of the referee committee, no awards were given in the field of Health and Life Sciences in this year. The scientists who were awarded by TÜBA Academy Council after national and international referee evaluations and TÜBA Academy Council:

In the Social and Humanities category; 2019 TÜBA International Prize was presented to McGill University Facult Member Prof. F. Jamil Ragep for his works that broadened the time and space horizons of the history of Islamic science, and especially for his researches on the ways in which Nasiruddin Tûsî, İbn Şâtır and Ali Kuşcu's astronomy studies were transferred to Europe in the pre-modern period and showed the effects of the emergence of Copernican astronomy.

In the category of Basic and Engineering Sciences; 2019 TÜBA International Prize was presented to Duke University Faculty Member Prof. Dr. Adrian Bejan for his remarkable number of creative works such as combining thermodynamics and heat transfer in the field of thermodynamics, developing design as a science that brings together all fields, and putting forth “Structural Theory”.

Prof. Dr. F. Jamil Ragep was born in West Virginia (USA), he attended the University of Michigan, where he received degrees in Anthropology and Near Eastern Studies, and later took a Ph.D. in the History of Science at Harvard University. He has written extensively on the history of science in Islam and has co-edited books on the transmission of science between cultures and on water resources in the Middle East. In association with the Max Planck Institute for the History of Science in Berlin, he is co-directing a project to study the fifteenth-century background to the Copernican revolution and in particular its Islamic sources. Thanks to a major grant from the Canada Foundation for Innovation and the Quebec government, Ragep is leading an international Digital Humanities project to catalogue all Islamic manuscripts in the exact sciences and provide a means to access information online on the intellectual, institutional, and scientific contexts of these texts. This is part of a larger project, the Rational Sciences in Islam (RASI), that is in collaboration with Prof. Robert Wisnovsky’s Post-classical Islamic Philosophy Database Initiative (PIPDI), also centered at McGill.

Prof. Dr. Adrian Bejan received his bachelor's degree in 1971, his master's degree in 1972 and his doctorate in 1975 from the Massachusetts Institute of Technology. He received the Benjamin Franklin Medal in 2018 and the Humboldt Research Award in 2019 for his works on the structural law of thermodynamics and natural design and the evolution of nature, engineering, science and social systems. Bejan wrote more than 30 books and published articles in 650 peer-reviewed journals. Bejan received 18 honorary doctorate degrees from universities in 11 countries, from France to Azerbaijan, from Brazil to South Africa. Bejan’s most recent book, “Freedom and Evolution: Hierarchy in Nature, Society and Science” was prepared by Springer for publishing in 2020.

TÜBA Fuat Sezgin Awards
TÜBA Fuat Sezgin Awards, which are given by the Academy to commemorate TÜBA Honorary Member the late Fuat Sezgin, in the year 2019, was  given in five fields (Outstanding Young Scientist, Authored Book, Special (Service, Individual and Institutional) as a result of the evaluation by the referee committees from the applications to the award program.

Prof. Dr. İhsan Fazlıoğlu was awarded with Fuat Sezgin Special Individual Award for his unique and important contributions to national and international research and education in the field of history of science and Islamic history of science. 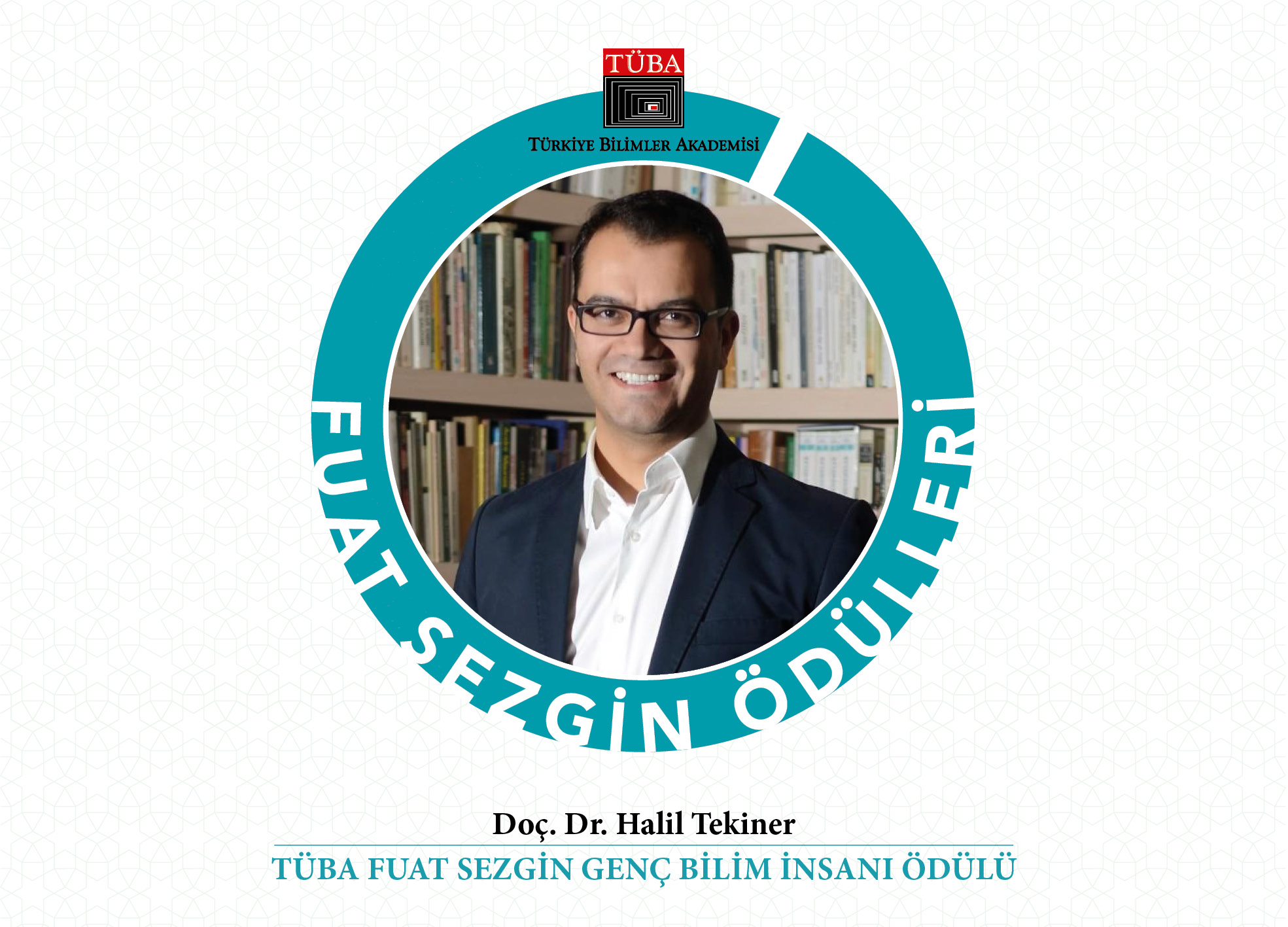 İstanbul Cezeri Museum was awarded with Fuat Sezgin Special Institutional Award for bringing the work of Al-Cezeri, one of the most important inventors and engineers of Islamic civilization, into Turkish and for the creation of a contemporary museum with the replication of technological devices.

Türkiye Diyanet Foundation’s Encyclopedia of Islam was awarded with Fuat Sezgin Authored Book Award for its fundamental reference framework for scientific research in all fields of Islamic science, art, thought, technique and culture and civilization, and naturally in the history of science.

Assoc. Prof Halil Tekiner was awarded with Fuat Sezgin Outstanding Young Scientist Award for his significant contributions to the history of Islamic science and his original works in the field of Ottoman-Turkish medicine and pharmacy history.

TÜBA-GEBİP Awards
TÜBA-GEBİP Awards, which is given every year within the scope of TÜBA’s mission of encouraging, appreciating and rewarding scientists, are given to 28 outstanding young scientists from 20 different universities and institutions in 2019. 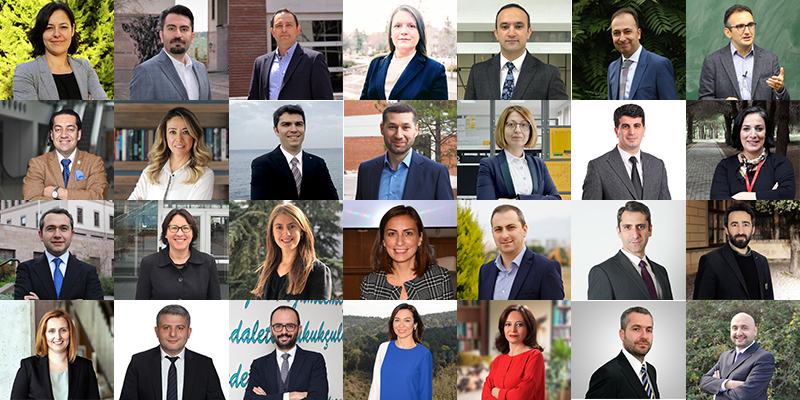 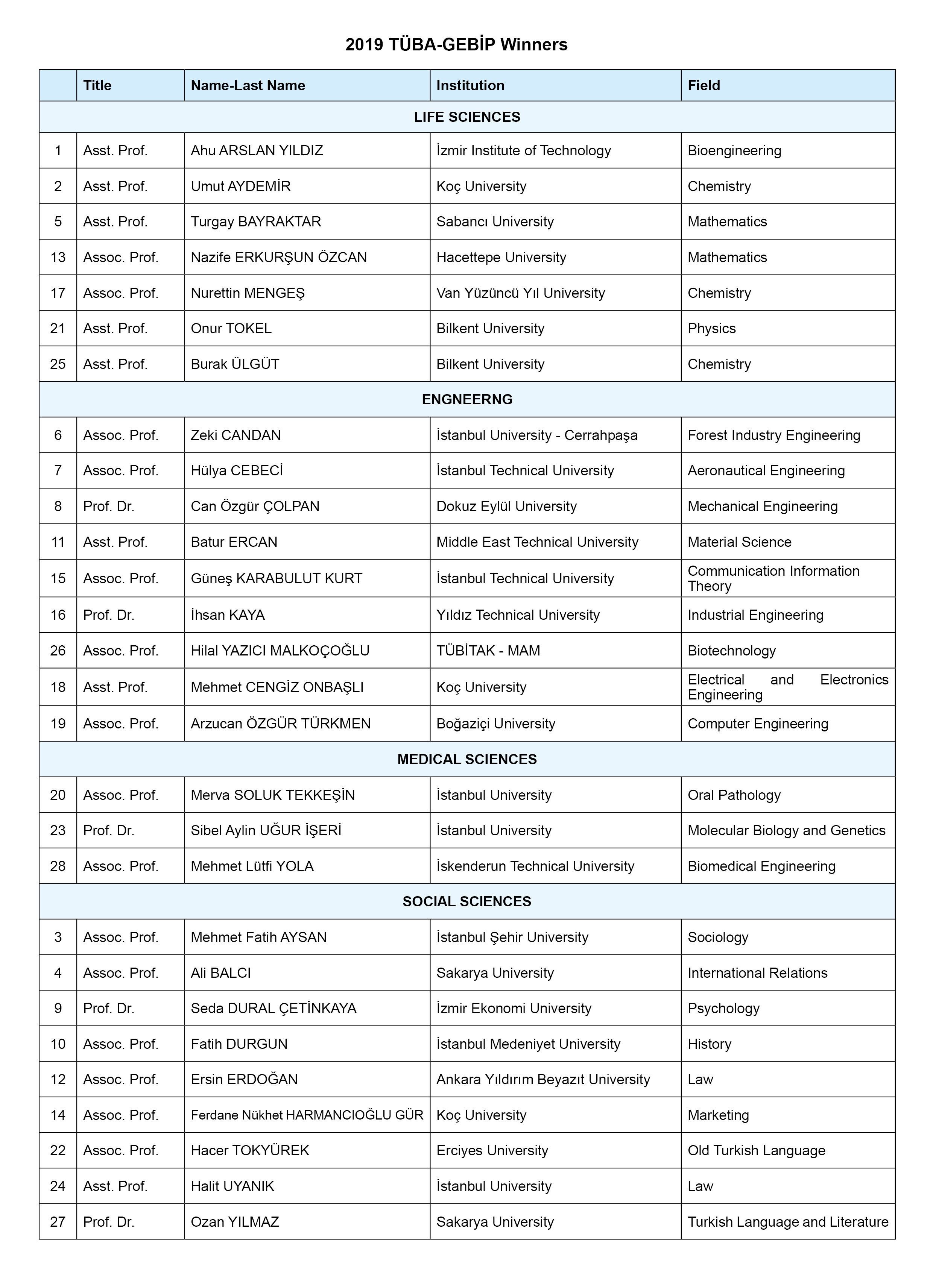 Thus, the number of scientists who won the TÜBA-GEBİP award has risen to 508. On the other hand, with the establishment of TÜBA-Young Academy with the TÜBA Council Decision dated November 2019, TÜBA-GEBİP Award winners are decided to become natural members of Young Academy.

2020 TUBA-GEBIP Awards which will be called for applications in the coming days, have special importance in terms of promotion and relations of Turkey in the international scientific community, encouragement of outstanding young scientists, and continuing their work in Turkey.

TÜBA-GEBİP Awards has been given to outstanding young scientists in the fields of nature, engineering, health sciences and social sciences with the purpose of continuing their academic studies in Turkey, creating their own working groups, rewarding and encouraging quality projects and publications at the international level from Turkey since 2001. GEBİPAward Winners are paid 20.000 TL for each year for three years. Within the scope of the original and highly demanded program, in addition to the financial support of 20.000 TL each year for 3 years, doctoral students in the thesis phase of TÜBA-GEBİP winners are also provided with additional support of 6.000 TL each year, and consultancy by academy members is provided for winners.

Within the scope of TESEP in 2019, which aims to encourage the production of qualified Turkish authored books for universities, seven Turkish scientific authored books (two authored book award; one Halil İnalcık Special Award in the field of Social Sciences; three Notable Work (Honorable Mention) have been awarded. 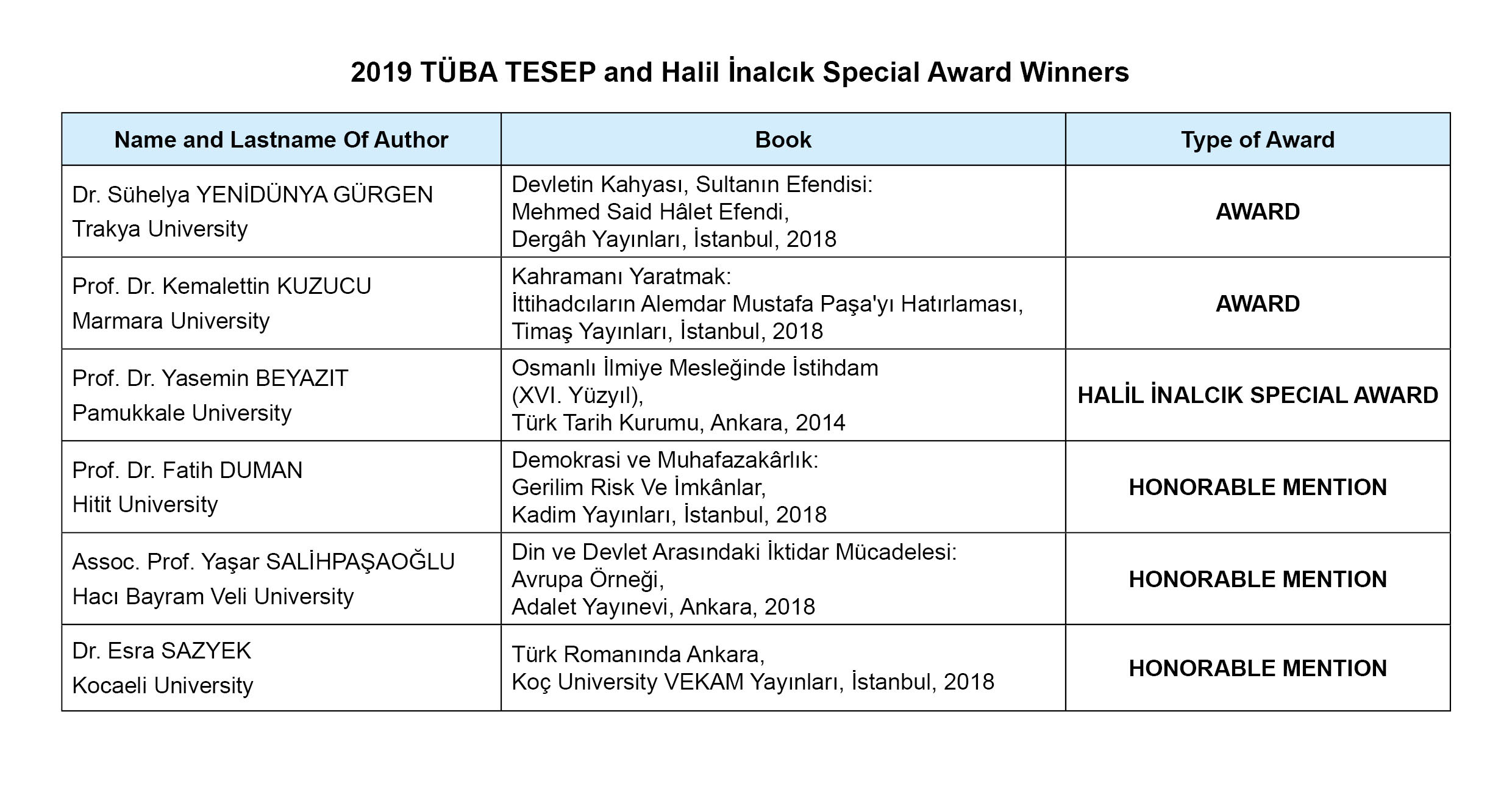 Thus, the number of awarded works so far has risen to 202.

2020 TÜBA-TESEP Awards, which will be called in the coming days, have a special importance in terms of encouraging the writing of qualified Turkish scientific books.

TÜBA-TESEP Awards are given to encourage the publication of qualified Turkish scientific authored books at university level in all fields of science. It was decided to continue the program called TEÇEP, which was initiated in 2008 and awarded authored and translation books until 2016, as TESEP, which aims to promote authored works since 2017, and to give a “Halil İnalcık Special Award” to a work in the field of Social Sciences. In 2018, TESEP and Halil İnalcık Special Award was determined as 20.000 TL and the Notable Work (Honorable Mention) Award was 7.000 TL.