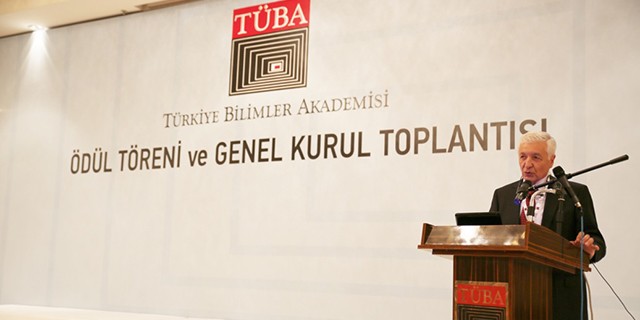 TÜBA Honorary Member Prof. Dr. Münci Kalayoğlu’s Academic Conference on ‘The Present and Future of Organ Transplants in the World and in Turkey’

The conference titled ‘The Present and Future of Organ Transplants in the World and in Turkey’ given by TÜBA Honorary Member Prof. Dr. Münci Kalayoğlu, who is regarded as one of the top 20 physicians in the world, was followed with great interest at the TÜBA Academic Day on June 23, 2014.

Prof. Dr. Kalayoğlu, who started his presentation by presenting himself in the most humble way as “a simple doctor to removes and attaches livers” in response to all that was said in his introduction at the conference, continued by providing information about the history of liver transplants. Prof. Kalayoğlu pointed out that Alexis Carrel, who had gone from France to America and studied how to bring tiny veins together at his laboratory in Chicago and had won the Nobel Medical Award for this research after which he continued research to uncover the significance of tissue typing done by scientists and genetic differences. Prof. Dr. Minci Kalayoğlu continued the conference by talking about his experiences, his studies, the importance of organ transplants as well what needs to be done to encourage transplants and added, ‘The number of organ donors in comparison to the number of people waiting for organs is very low in our country and more needs to be done to promote organ donating’.

After his speech Prof. Dr. Kalayoğlu was presented a plaque by the Academy Chairman Prof. Dr. Ahmet Cevat Acar.