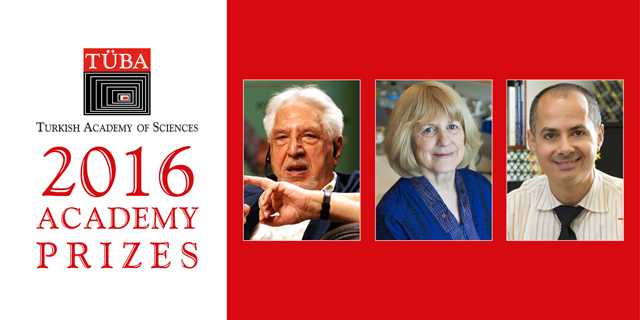 TÜBA Academy Prizes are annually given, in three categories, to nominated scientists with original, leading and path-breaking works in their fields. Nominations are made by TÜBA members, science academies in the world and other science institutions and scientists invited as nominators.

Şerif Mardin, of Istanbul City University, received the prize in the category of Social Sciences and Humanities in recognition of his works in modernity and religion, modernization in Turkey, ideology and civil society, centre-periphery and neighbourhood-school relations in Turkey.

Mary-Claire King, Professor of Genome Sciences and of Medical Genetics at the University of Washington, has been awarded in the category of Health and Life Sciences in recognition of her studies in the field of breast cancer genetics.

Omar M. Yaghi,  the James and Neeltje Tretter Chair Professor of Chemistry at the University of California, Berkeley, has become the receiver of the prize in the category of Basic and Engineering Sciences in recognition of his works in metal-organic frameworks (MOFs).

The Academy Prizes comprise an Academy Medal and prize money of USD 30.000 for each laureate. The laureates will be awarded their prizes by his Excellency President Recep Tayyip Erdoğan in a special ceremony to be held in the Presidential Palace.

Speaking on the announcement of TUBA Academy Prizes, Professor Ahmet Cevat Acar, the president of TÜBA, said that the Academy Prizes constituted a milestone in the mission of TUBA and it has become an important channel for Turkey to address international scientific community.