TÜBA Awards, under the auspices of the Presidency, TÜBA Academy Prize, TÜBA-GEBİP (Outstanding Young Scientist) and TÜBA-TESEP (Scientific Authored Book), found their owners. All awards will be given to their owners by President Recep Tayyip Erdoğan at a ceremony to be held at the Presidential Complex.

Emphasizing that the referee evaluation processes of the traditional awards of the Academy are carried out meticulously, TÜBA President Prof. Muzaffer Şeker continued his speech as follows: “Four scientists in three different categories have been awarded TÜBA Academy Prize; a total of 31 scientists, -specific to this year- four of them in the field of polar studies, has been awarded TÜBA-GEBİP Award; eight authored books have been awarded TÜBA-TESEP Award. It is important for the future of our country, our national and domestic production and our full independence to reward the contributions of our scientists to our country and humanity and to encourage young generations to scientists with their successful work. I congratulate my award-winning colleagues and wish them continued their successful studies. The referee evaluation process of the COVID -19 Special Award continues, and when the process is completed, the results will be shared with the public. I would like to thank all healthcare professionals who made their efforts to combat the pandemic at the cost of their lives, and I remember with gratitude and mercy our scientists who died in this process.”

Scientists deemed worthy of TÜBA Academy Prizes by the TÜBA Academy Council as a result of domestic and foreign referee views and evaluation of field committees:

Prof. Wael B. Hallaq from Columbia University has been awarded with 2020 TÜBA Academy Prize in the Social Sciences and Humanities for his works on Islamic law studies within the scope of Islamic jurisprudence history; especially analyses on issues such as ijtihad-fatwa-qada, the problem of authenticity, production of legal knowledge, the closure of the gate of ijtihad, and new insights brought on the critiques of orientalism-modernity.

Prof. Murat Günel from Yale University has been awarded with 2020 TÜBA Academy Prize in the Health and Life Sciences for his works on identification of inherited genetic mutations that cause vascular diseases involving the nervous system and cortical developmental disorders and elucidating their mechanisms.

Prof. Erik Jeppesen from Middle East Technical University has been awarded with 2020 TÜBA Academy Prize in the Basic and Engineering Sciences for his works on the protection of fragile freshwater ecosystems, lakes and rivers on a global basis, and the effects of global climate change on aquatic ecosystems.

Prof. Okyay Kaynak from Boğaziçi University has been awarded with 2020 TÜBA Academy Prize in the Basic and Engineering Sciences for his works and contributions on the sliding mode control method developed by using artificial intelligence and artificial neural network techniques in his applications and studies in the fields of industrial process control, aviation, vehicle control, robotics, and automation.

TÜBA Academy Prizes comprise an Academy Medal and prize money of USD 30.000 for each prize, and are annually given, in three categories, to nominated scientists with original, leading and path-breaking works in their fields.

Prof. Wael B. Hallaq was born in Palestine in 1955. He studied Political Science and Middle Eastern History at Haifa University in 1978. He went to USA and started his graduate education at Washington University while doing his graduate studies in these two fields. He completed his master’s degree in Islamic law in 1979 and his doctorate in which he criticized the theses on closed door of ijtihad in 1983. After working at Washington University for a while, he first worked as an assistant professor, then as an associate professor and full professor at the McGill University Institute of Islamic Studies in 1985. He worked for many years at the Comparative Law Institute in the Faculty of Law of the same university since 1990. Hallaq, who started working as a professor at Columbia University since 2009, has a lot of works that are translated in many languages, including Arabic, Italian, Indonesian, Japanese, Turkish and Persian. Wael B. Hallaq is one of the pioneer names that has marked almost the last thirty years of Islamic law studies in the West. The academic adventure of Hallaq, who started to make important contributions to the field with his studies in the early 1980s, has been the subject of various studies in Turkish.

Prof. Murat Günel graduated from Istanbul University Faculty of Medicine in 1991. Prof. Günel, who made groundbreaking contributions to science on the identification of inherited genetic mutations that cause vascular diseases and cortical developmental disorders and their mechanisms, defined the WDR62 gene, which is the main function in cortical development, with his pioneering contributions to exome sequencing methodology. This research was included in Nature’s “Breakthrough of the Year” list in 2010. Prof. Günel, whose clinical studies focus on the treatment of brain aneurysms and vascular malformations, especially in the fields of arterio-venous and cavernous malformations, is considered a world authority on occlusive vascular diseases such as carotid disease and gamma knife surgery.

Prof. Erik Jeppesen served at the Danish Aarhus University and the National Environmental Research Institute. Prof. Jappesen is entitled to be supported with TÜBİTAK 2232 International Leading Researcher Program and continues his studies on the effects of climate change on lake ecosystems at METU Department of Biology. Prof. Jeppesen’s work on freshwater ecosystems contains important scientific data for the protection of these fragile ecosystems, lakes and rivers on a global basis, and provides a basis for restoration. Prof Jeppesen, one of the world’s leading researchers on lakes and reservoirs, is also working on analysis of rivers and managing the effects of different stress factors on aquatic ecosystems. The researches of Prof. Erik Jeppesen, who participated in the study groups and participated in almost all continents from the North Pole to the Mediterranean, Asia to America, are groundbreaking on the effects of global climate change on aquatic ecosystems. He is a member of the IPCC2007 panel on climate change, which received the Nobel Peace Prize in 2007.

Prof. Okyay Kaynak was born in 1948. He completed his PhD in Electrical and Electronics Engineering in 1972 at Birmingham University in the UK. He continued his professional work in Saudi Arabia after working at SEKA in Turkey. He retired as a professor in 2015 from the Electrical and Electronics Engineering Department of Boğaziçi University, which he joined in 1979. Currently continuing his academic studies as Emeritus professor in the same department, Prof. Okyay Kaynak has been working at the Harbin Technology Institute of China at various intervals since 2003. Prof. Kaynak’s article with his student on “Sliding Mode Control” published in IEEE Transaction on Automatic Control Journal in 1987 was widely accepted for its applications in industrial process control, aviation, vehicle control, robotics and automation. He became a pioneer and groundbreaker in the sliding mode control method that he developed using artificial intelligence and artificial neural network techniques. During his relations with China, his efforts to build bridges between Turkish and Chinese scientists based on mutual benefits were appreciated by the Chinese Government and received the “China Friendship Award” in 2016. The international value of Prof. Kaynak’s studies was proven by the Humboldt Research Award he received in 2016.

TÜBA-GEBİP Awards
TÜBA-GEBİP Award, given every year within the scope of the mission of encouraging, appreciating and rewarding scientists, has been awarded to a total of 31 outstanding young scientists from 21 different universities and 2 institutions in 2020. Thus, the number of scientists who have won TÜBA-GEBİP Award so far has increased to 539. 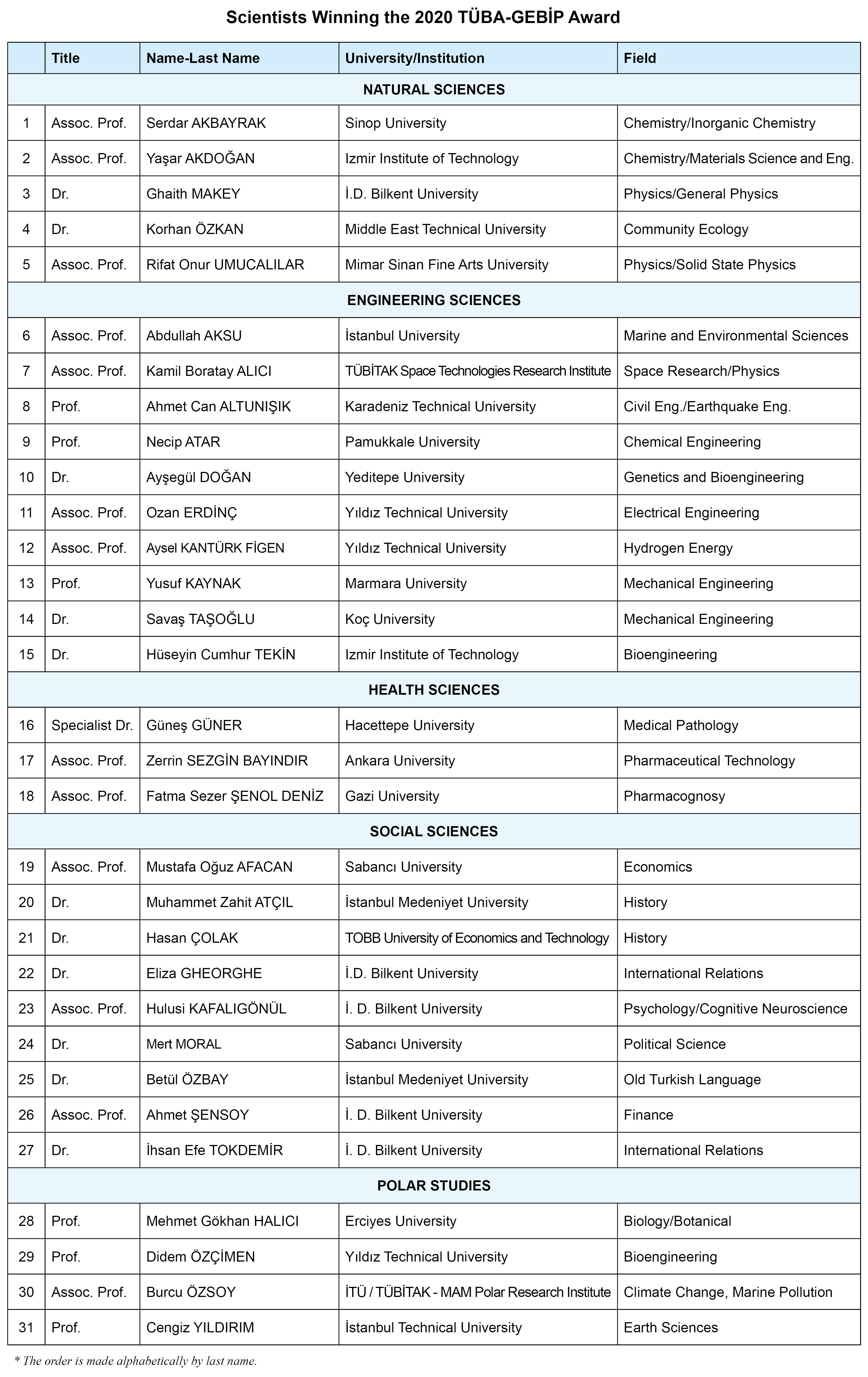 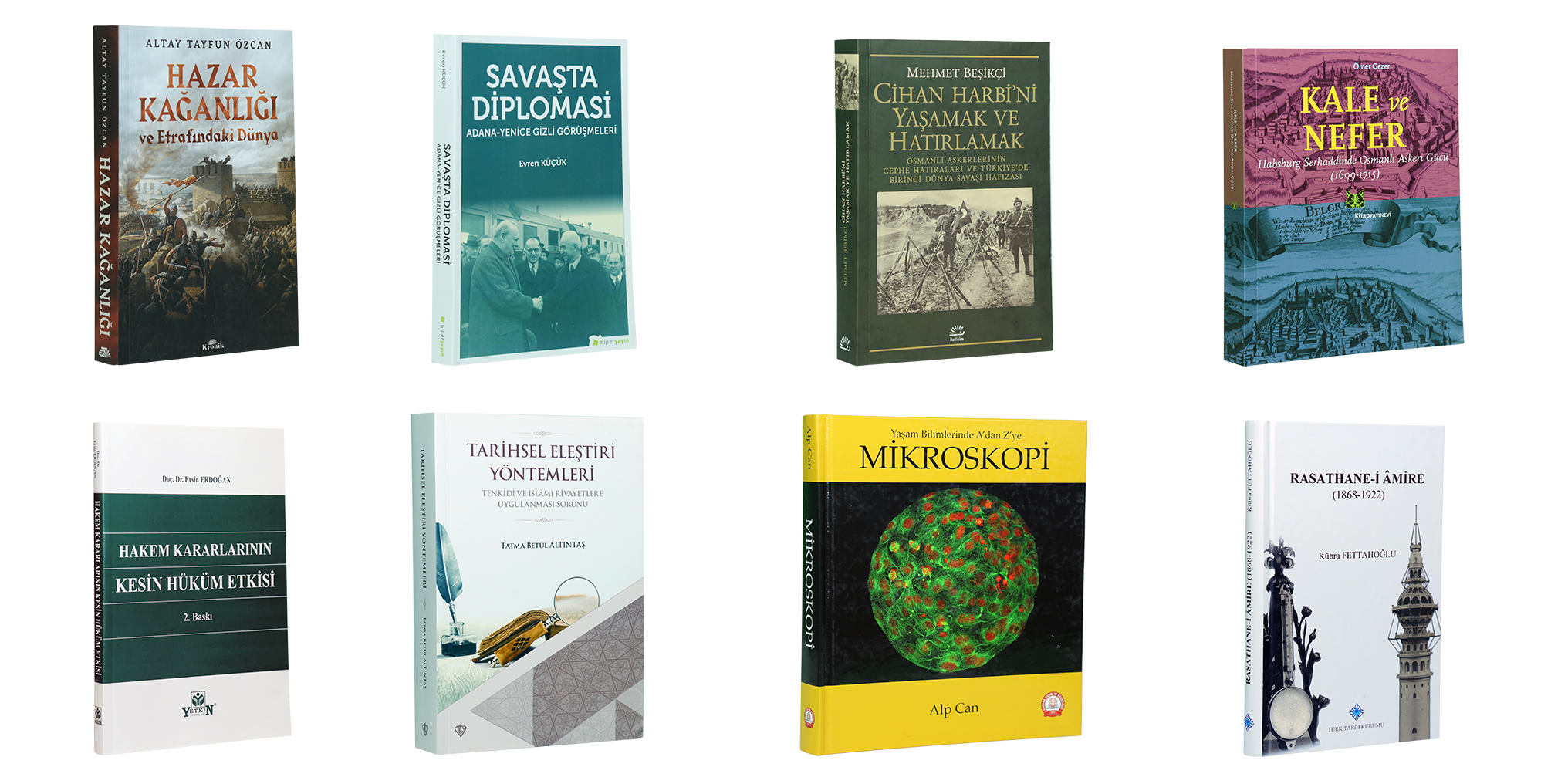 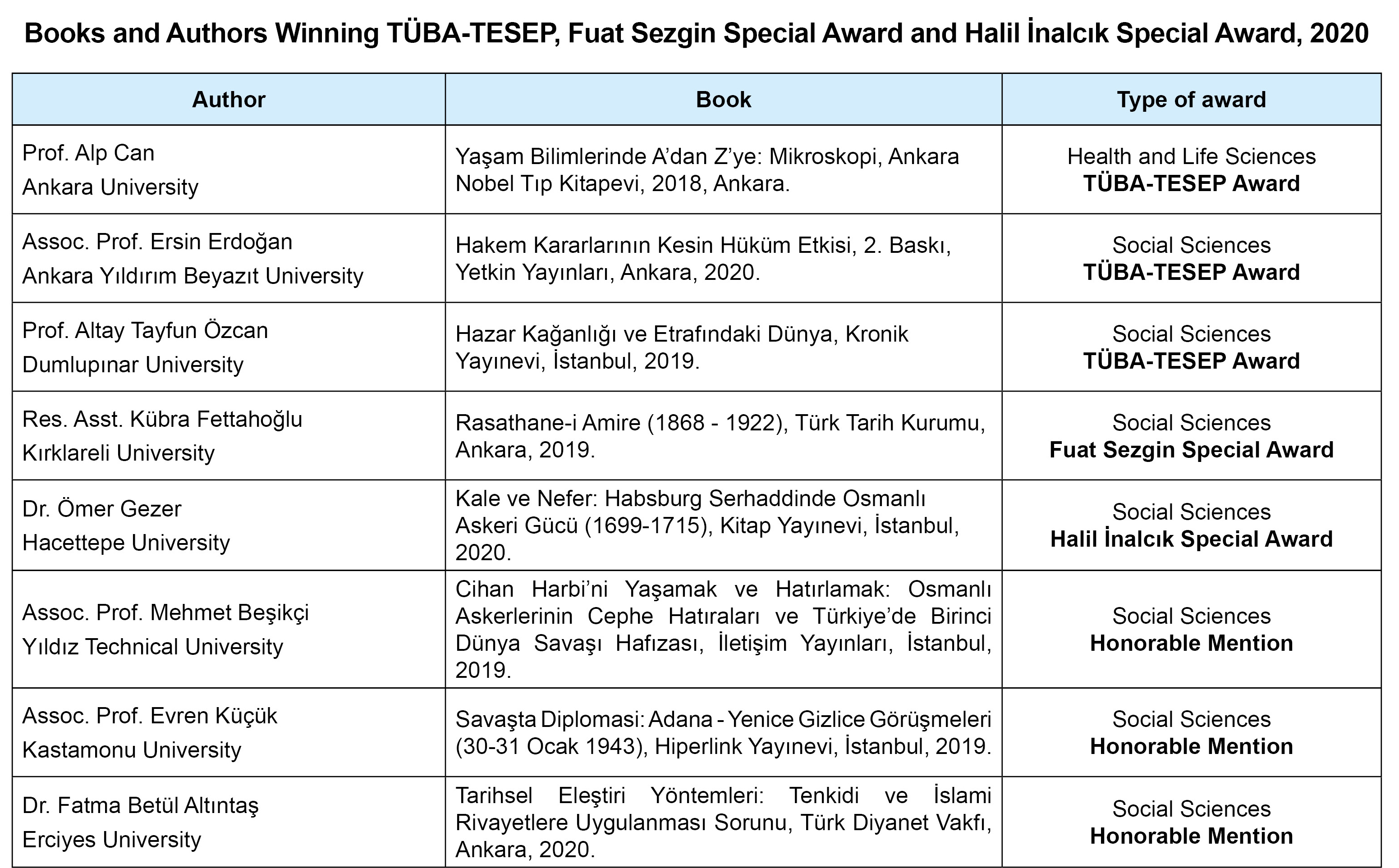 TÜBA-TESEP Awards have a special importance in terms of encouraging the writing of qualified scientific works in Turkish. 20.000 TL as a monetary award for the authored book award, Fuat Sezgin Special Award, Halil İnalcık Special Award,  and 7.000 TL for the honorable mention award are provided within the scope of TESEP.